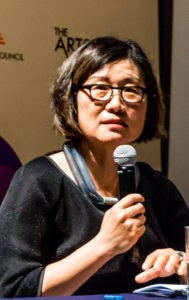 Shu-mei Shih is a professor of comparative literature, Asian languages and cultures, and Asian American studies at the University of California, Los Angeles. Among other works, her book, Visuality and Identity: Sinophone Articulations Across the Pacific (2007), has been attributed as having inaugurated a new field of study called Sinophone Studies. Sinophone Studies: A Critical Reader (2013) is a textbook that she co-edited for the field.

She is currently working on two monographs entitled Empires of the Sinophone and Comparison as Relation, and two co-edited volumes: Keywords of Taiwan Theory and World Studies: Theories and Debates.

The Comparative Literature Department is grateful for the support provided by the Willson Center Distinguished Artist/Lecturer Program for making this lecture possible.